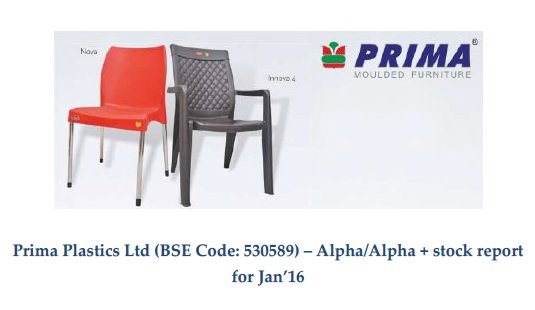 We would like to share with you a detailed report on Prima Plastics (BSE – 530589). Prima Plastics is a small cap company into plastic furniture manufacturing business and has the potential to make it big on the both domestic and international front.

Note: The report is being shared only for the purpose of information and is not an investment advice. In case you invest in Prima Plastics or for that matter any company, please carry out your own due diligence.

Till recently the company also had another business line of Aluminium Composite Panels (ACP), however the same was consistently reporting losses and in 2015 the management decided to close the same.

Besides manufacturing and selling PMF in India, the company has also been exporting its products to Africa, Middle-East and Central America and generates ~23% of its sales from exports.

Further, Prima Plastics also has a 50:50 joint venture (JV) in Cameroon, Africa by the name of Prima Dee-lite Plastics and the same manufactures PMF and HDPE Woven Sack Bags for sale in Cameroon.

Important points – Till recently the management’s attention was divided between profitable PMF business and loss making ACP business. With the closure of ACP business, PMF will have undivided attention and further the company can use the existing location, facilities for expansion of PMF manufacturing and focus on expansion of distribution network.

The JV of Prima Plastics in Cameroon has been performing extremely well. Prior to setting up a JV, the company had been exporting to Cameroon and later on realizing the potential and limited competition decided to set up a JV for manufacturing in Cameroon itself. In the last 5 years, Prima’s share of revenue (50%) in JV has grown from 6.5 crores to 32 crores and the before tax profitability has grown from 1.7 crores to 7.6 crores. In fact, JV is reporting higher profitability than the domestic operations of Prima Plastics.

Lastly, on the back of success in Cameroon and experience of exporting to other African and Central American nations, Prima plastics is exploring the opportunity of setting up manufacturing units in small Central American and African countries and zeroed in on Nicaragua in Jul’15.

So, we believe there’s good scope for growth both in domestic and international operations of the company.

Management – Prima Plastics is led by Parekh family with Mr. Bhaskar Parekh as the Executive Chairman and Mr. Dilip Parekh as the Managing Director. The promoters own reasonably good 58.85% stake in the company and thereby their interests are directly aligned with those of minority shareholders.

Overall, company’s disclosures policies, remuneration to the promoters and related party transactions are within reasonable range and we haven’t found any major issues in terms of corporate governance.

Further, sooner than later management has closed the non-profitable ACP unit to focus only on its core competency of PMF business.

The management has not diluted equity in the last 10 years and has managed to grow the business through internal accruals and debt. In fact, on consolidated basis the company is debt free with surplus cash of 3-4 crores.

Financial Performance – Prima’s performance over the years has been reasonable and there are early signs of expected improvement based on important points discussed above.

The company’s reported performance could have been much better; however ACP division consistently reported losses and impacted the performance of the company to a certain extent.

Focusing only on PMF business, the company has reported around 15% CAGR in sales over the last 5 years and ~16% CAGR in PBT over the same period. While domestic PMF business of the company has reported 11% CAGR for the last 5 years, company’s JV share has grown from 6.5 crores to 32 crores in terms of sales and 1.7 crores to 7.6 crores in terms of PBT.

JV in Cameroon has been reporting extremely good performance in terms of growth (though on a lower base) and profitability and is expected to continue performing well on the back of relatively low competition and growing demand in the country and nearby African countries.

As far as domestic operations of the company are concerned, we believe that singular focus on PMF business and low cost CAPEX at existing facilities should help the company report higher growth in sales and much higher improvement in profitability. In fact, in the half year ending Sep’15 the company’s margins have already improved significantly, though helped by lower crude prices as well.

Valuations – At around current price of 110, the market capitalization of the company is 120 crores. The company is debt free with 3-4 crores surplus cash

For FY 16, we expect the company to report (on consolidated basis) ~15 crores PBT (13 crores PBT for PMF business in FY 15) and 10-11 crores PAT with average post-tax ROE of ~20%. Thus, the stock is available at ~11 times FY 16 (E) earnings and we therefore believe that the valuations of the company are reasonable around current levels of 110.

Disclosure: I have personal investment in Prima Plastics and have not traded in the stock in the last 30 days.

This report is for the personal information of the authorized recipient and does not construe to be any investment, legal or taxation advice to you. Ekansh Mittal/Mittal Consulting/Katalyst Wealth is not soliciting any action based upon it.

The recipients of this report should rely on their own investigations. Ekansh Mittal/Mittal Consulting and/or its affiliates and/or employees may have interests/ positions, financial or otherwise in the securities mentioned in this report. Mittal Consulting has incorporated adequate disclosures in this document. This should, however, not be treated as endorsement of the views expressed in the report.

We submit that no material disciplinary action has been taken on Ekansh Mittal by any regulatory authority impacting Equity Research Analysis. The views expressed are based solely on information available publicly and believed to be true. Investors are advised to independently evaluate the market conditions/risks involved before making any investment decision

Last week our founder Ekansh Mittal got an amazing opportunity to address the students of Prof. Sanjay Bakshi The topic was Special Situations in Stock Markets and the idea was to share the thought process through case studies The PPT can be accessed at katalystwealth.com/2020/10/22…