Maithan Alloys – The valuations look very low even by t

Though commodity businesses do not attract us much, however here’s an interesting company which looks good on various parameters. This combined with the fact that stock has shed more than 50% of it’s value since it’s peak and looks attractive on the grounds of it’s asset value and their potential to generate profits for the company.

Maithan Alloys Ltd (Maithan) is one of Indiaâ€™s largest manufacturers of manganese alloy, a type of ferro alloy used to manufacture steel. The company derives ~45% of revenues through exports mainly to European and Asian countries. The annual production capacity of the company is 64 MVA (Kalyaneshwari unit 49 MVA, Meghalaya unit 15 MVA) which translates into a total installed capacity of 1.15 lac TPA (as on 31 March 2011 based on a given product mix).

Even though ferro alloys is largely a commoditised business, Maithan enjoys higher realisations in the industry owing to its ability to manufacture niche products as per customer requirements. Also, its products have witnessed near zero rejection rate owing to strict adherence to quality parameters. The same has enabled the company to be competitive in export markets. Also it enables the company to pass on price hikes in raw materials to it’s customers, although with a time lag.

For instance, per tonne realisations grew 15.57% to Rs. 61,800 in 2010-11, as the company could pass on increased input costs, though not completely (primarily manganese ore) to clients.

Maithan Alloys, recently embarked on the largest addition to their production capacity.The company is adding 72 MVA (1.2 lac TPA plant) through a greenfield facility in Visakhapatnam and the same would double the ferro alloys manufacturing capacity of the company. The expansion is being executed through a 60% subsidiary Anjaney Alloys.

The good thing about the above expansion is that the first phase of 36 MVA of the 72 MVA capacity plant is expected to commence production in Oct-Nov 2011 with the second phase of 36 MVA expected to be commissioned in March 2012, while the stock price of the company doesn’t seem to take notice of the same. As per the management the revenue potential of the expansion is Rs 600 crore annually, however I expect this revenue potential to reflect only H2 FY 13 onwards because plant is estimated to operate at a quarter of its full capacity during the first six months.

So, if all goes well and the demand for the steel doesn’t go down drastically (as happened during the 2008 crisis), Maithan alloys could be clocking in revenue of Rs 1100-1200 crore for FY 14.

We like the fact that company is nearing completion of expansion because it eliminates many risks and many unknowns such as:

As in most of the early stage expansion cases, the hype starts setting in stock prices as the company announces the expansion plans. The analyst’s start accounting for earnings expansion ignoring the fact that most of the plans get delayed and the expanded plants start operating at optimal capacity only 6-9 months down the line. So the earnings that they had envisaged two years ahead (on the announcement of expansion plan), usually get deffered by a year or two and the prices capitulate.

The other important factor about the company’s expansion of Rs 250 crores is that they could start with the same, progress and will now probably complete it very smoothly. The company is even repaying back much of it’s term loans as they have been generating good cash flows from operations. It’s always a good signal when the company lowers debt on books because it reflects the conservative intent of the management. In most of the cases, the management lose sight of how to operate a business in the absence of high debt and the business is always on steroids. 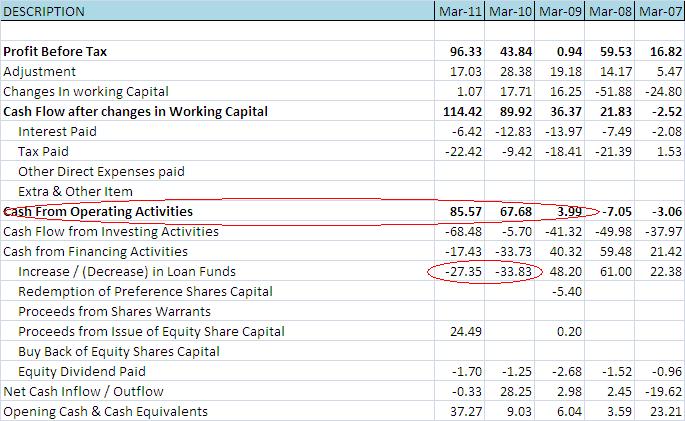 As stated above, at a market cap of Rs 134 crores and 85 crore debt (Rs 48 crore cash and cash equivalents, so effectively an enterprise value of Rs 170 crore), the valuations look very cheap in the light of the fact that company’s earning potential should be Rs 80-90 crores on an average (considering the cyclicality of business) 1.5-2 years down the line.

Disclaimer: The stock has not been recommended as yet to Alpha and Alphs Plus Portfolio members as the further due-diligence is still on for potential risks (apart from the cyclical nature of the business and the potential downside to ferro alloys prices in the light of global slowdown).