The thought process of the man behind the Greatest Weal 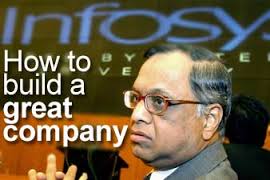 Infosys completed its initial public offering of equity shares in 1993. Retail investors gave it a lukewarm reception. The reason was the timing. The IPO had come at a time when most of the investing public in India was still reeling from the stock scam of 1992.

Well that much about Infosys. Lets read what N.R. Narayana Murthy, the man behind Infosys, reminisces about setting up Infosys and the bold decisions that helped the software giant succeed.

The same should help us look for some of the qualities in the Promoters/Management of the companies while investing in them.

For us, some of the highlights are as below:

One of the most important lessons I have learnt is that you need character and chance for the success of any initiative. In the beginning you have to make a lot of sacrifices being away from family, you have very little resources. For example, we have stayed in extremely inexpensive hotels, we travelled in India by train from Bombay to Delhi when we were trying to get our licences.

When you are very small, everyone around you will say that you won’t succeed. I remember I once went with a friend of mine to his friend’s house for dinner in Delhi. We had just started in 1981 and this person, who was ex-IBM, was so insulting, and so dismissive of me and the whole concept of Infosys. So you have to accept lots of discouragement, lots of scepticism. To do all of that you need character, but you have to retain hope. In the 1980s it took us one year to get a telephone connection, three years for a licence to import a computer, 15 days to get permission to travel abroad for a day. It required tremendous strength of character.

Second, you need chance. As somebody said, When god is shy to announce his presence he comes in the form of chance. I have seen a lot of my friends who were smarter than us as a team, who had better resources, who could have succeeded a lot better, but they didn’t. There were about 13 teams, which formed companies like Infosys between 1979 and 1982, and I had documented it and they just didn’t make it. I have no other explanation than the fact that we were lucky; god was very kind to us.

When you are building the company and go from one orbit to another, that sense of achievement generally induces a lot of confidence and, in most people, a sense of arrogance leading to hubris. Therefore, it is very important for us to remember, that you have worked hard, maybe you are a little bit smart, but a lot of it happened because you were lucky. At least that’s what I have told myself, my colleagues and my children.

The second thing I learnt in this extraordinary journey of 32 years is that courage is the first attribute of a leader. If a leader does not have courage then it is unlikely that any other attribute of that leader will find utterance.

A leader for whom I have the highest respect in the world is Mahatma Gandhi. His greatest strength was leadership by example. For example, when I founded the company, I was generous to all my younger colleagues. Kris [Gopalakrishnan], [K.] Dinesh, Nandan [Nilekani] were less experienced than me, they had only one, one-and-a-half years of work experience. I was about 10 steps ahead of them when we founded Infosys. I was number two in Patni Computer Systems (PCS) and these were all software engineers. I gave them huge amounts of equity. I took a very small percentage of my salary, one-tenth of what I used to get, but I made sure that all of them got 20 percent more, so I brought down the difference between them and me to almost nothing.

Third, my wife was as qualified, if not more  except for Kris who was a Master’s in Computer Science  than any of the others, she was definitely more qualified than me, but I said if we want to create a company that is truly professional then family relationships are not going to be a part of it. So she made a sacrifice.

If there was one example of success of the reforms ushered by Manmohan Singh as finance minister it was Infosys. When licences were abolished and current account convertibility was introduced, 100 percent equity was allowed to MNCs in technology to come and operate in India, I realised that from now onwards the decisions of the corporate will have to be taken in the boardroom rather than waiting in the office of the government. In 1992, we started our own office in the US. That was the turning point.

I realised pretty early in 1992, that if you want to build a brand without spending money then we have to do unusual things, get written about and get covered by the TV.

In 1992, we had requested Ravi Chander, Hema’s [ex-HR head of Infosys] husband to do an unaided mind recall of Infosys among the students at IIT and IIM. It was very sad zero percent of students named Infosys as the company they would join. Ravi was very apologetic when they made the presentation. I said our work is cut out and our charter is to become the Number One company in the next five years.

Interestingly, we did it in just four years. In 1996, surveys said we were Number One with 18 percent of students saying they wanted to join Infosys.

Next was an MNC with 11 percent. We did many things in that period. We did the employee stock option plan in 1994, we got the ISO 9001 and CMM Level 4 certification, got listed in India, became the first ones to publish quarterly reports, and went in for a Nasdaq listing in 1999. People got curious and they wanted to spend some time studying it.

I took a big gamble in building India’s first software campus in 1994. At that time our revenue was Rs. 13 crore and we had just gone public and I said we will build a campus of Rs. 19 crore. Almost all my colleagues said this man is crazy. Including my friend Mohandas Pai who had not yet joined and he was observing us from outside as an investor. But I knew that if I have to retain my people in competition with multinationals, who were all coming back to India thanks to liberalisation, I had to create a hospitable infrastructure. It was a courageous decision.

Profit is an extraordinary attribute of a corporation. In one figure it sums up the entire story of the corporation as long as you are seeking that profit legally and ethically. I am extremely focussed on the bottom line. As long as I was in the company I didn’t allow the margins to be diluted. I would rather sacrifice the topline growth but never the margins. Therefore, every entrepreneur must focus on profitability and the consequence of that is your growth in EPS. When you focus on that you are focussing on a higher P-E ratio and by doing that you are focussing on the growth in the market cap and you are focussing on the personal wealth.