Try and fail than fail to not try at all 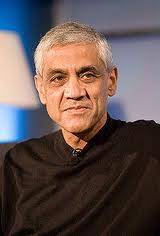 Many of the entrepreneurs at the Nasscom Product Forum in Bangalore on Wednesday morning had waited for years to listen to Vinod Khosla: About his famous Fail Strategy; what keeps him ticking even 30 years after he founded Sun Microsystems; why heâd rather try and fail than fail to not try at all.

And it was worth the wait. Khosla, founder of Khosla Ventures, rarely speaks at conferences. In the whole of last decade, he said, one of the few conferences he chose to be a speaker in Silicon Valley was called FailCon. Such is his conviction about failures being intrinsic to entrepreneurial successes. My willingness to fail gives me the ability to succeed, he said, kick-starting the two-day conclave. And if anyone thought that was punditry coming from a highly successful venture capitalist (by the way, he prefers to call himself ˜venture assistant), he reminded people that he didn’t start out as a VC, but as an entrepreneur, and that even as a VC he’s failed more often than many others.

Why? Because he chooses to make big bets; only such ideas bring œlarge shifts.

You only lose 1x your money if you fail, but if you succeed, you can make 100x. That’s the beauty of product companies, he told the packed auditorium of entrepreneurs. Adding an irreverent piece of advice, he said we give too much credit to MNCs (Multi-national Corporations) or government. They are largely irrelevant in the business of innovation.

In India, the recent successes of companies like Flipkart and InMobi haven’t missed his attention. He agrees with Nasscom Product Forum co-chairman Sharad Sharma œprediction that for the next few years, at least one product company from India will achieve $1 billion valuation every year, but cautions that India needs more companies in newer categories if it has to maintain the tech industrys decadal 8X or 9X growth. The successes at Flipkart, Naukri.com, and others, he says are extrapolation of what has happened in the Western market [Amazon and Monster.com].

I’d like to see things that open up a whole new paradigm. India is a market of over one billion people; US is only 250 million people. Right behind India is other emerging markets whose GDP (gross domestic product) is rapidly changing, he said.

Backing that advice with cool dozen sectors that could all be potential product goldmines, he reiterated that India needs to go â€œbeyond outsourcing, replicating Western successes and beyond small shifts.

Reminiscing about a telecom session that he chaired in Delhi, organised by McKinsey almost a decade ago and where Mukesh Ambani sat in the front row, looking at the likely shifts in telecom, he said it was hard to imagine the shift away from landlines then. He was betting that VOIP (Voice over Internet protocol) would come first and mobile later, but he was proved wrong. Today, India has more mobile phones (650 million) than toilets (350 million). Who could have predicted that?

So the bottom line for Khosla, the inveterate geek who considers science and technology as his religion, is that technology drives the market, not extrapolation of past. He studies the emerging areas deeply, even if that means taking a week off, away on the beach, collecting a bunch of books related to the subject — be it genetics or clean-tech, software architecture, education or health.

Soumya Banerjee got a first-hand experience of that scrutiny. As CEO and founder of Attano Media & Eductaion Pvt Ltd, he was one of the seven entrepreneurs who got an opportunity to have a closed door session with Khosla, each getting a few minutes to present their elevator pitches.

Banerjee smiled: We couldn’t go past the first slide. We got engaged in the discussion. He knows the area so wellâ€¦â€ Is Khosla interested in investing in start-ups in India? Certainly, he says. But more importantly, I want to inspire them. It’s painful flying from San Francisco to Bangalore, but I am here to encourage them,â€ he told Forbes India in an interview.