Should you or should you not invest in IPOs? 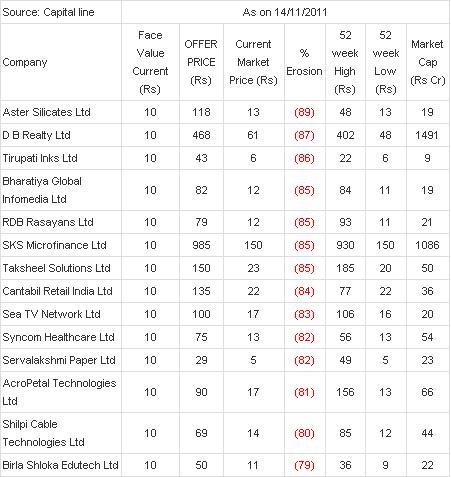 Looking at the above illustration, you may have already decided that going forward you will not invest in IPOs, more specifically the smaller ones. However before you reach a final conclusion, why not learn some important details.

Note: The below details, regarding modus operandi of operators were shared by Mr. Ashok Kumar, Chartered Accountant.

A few months ago, an ex-student of mine, who is now engaged as an Equity Research Analyst with a prominent broking house cautiously asked me whether I ever felt that I was far too dismissive while evaluating IPOs, and more particularly the smaller ones.

He cited the example of a company whose IPO we had rated as D (Poor) but whose stock price had risen by 50 per cent post listing. My response then was, let us revisit this company’s stock price 45 days down the line.

Sure enough, the stock quoted 60 per cent below its IPO price by the end of the stipulated period and my student had learnt his lesson well in the best way, as I often repeat at my guest lectures – by actually losing money.

Am certain, like my student, many of you have often wondered about the phenomenon of a clearly under-par company with a ridiculous price-tag getting full subscription and thereafter quoting ( albeit temporarily ) at an even more ridiculously high price post listing. Given the lack of fundamentals of most of these companies, clearly, there is more to these bumper listings than meets the eye.

Based on anecdotal evidence, SEBI is either oblivious or disinterested in this phenomenon and resultantly the rapacious machinations of criminals, euphemistically and rather gently, called ‘operators’ continue uninterrupted. While the onus of busting this ‘drop by drop’ multi-crore small IPO scam and proving the modus operandi of the operators and promoters must rest at SEBI’s door, let us now turn the spotlight on how it must be perpetrated.

Let us assume a scenario where a company, RXL’s financials are so obviously weak that banks will no longer be willing to part with good money to recover their bad money.

In such a scenario, one of the several small and unknown investment bankers approaches the company and offers its management an IPO plan which will be a win-win scenario for both parties concerned.

Let us again assume, for arguments sake that Rs. 50 per share is the mutually agreed fair value of the company arrived at by the two parties. The investment banker then makes a Don Corleone (a major character in Mario Puzo’s The Godfather saga) like offer that cannot be refused, of taking the IPO through at a price of Rs 100 per share with the ‘support’ of their guaranteed investors and operators!

Secure in their knowledge that the fundamentals and pricing of these small IPOs are so poor that informed retail and HNI investors will keep away, the shares thus get distributed to the guaranteed investors and operators thus choking whatever little free float there otherwise may have been post listing.

So how these Operators and Promoters relieve themselves on the heads of gullible and greedy retail investors?

Once the issue gets subscribed in this manner, the post-listing games begin and soon the buyers and sellers left are the same parties albeit under different garbs. This facilitates a ‘price discovery’ that leave alone market participants, but even Christopher Columbus would have failed to fathom.

It is here that the media, and more specifically the television channels can play a more responsible role. Instead of merely flashing the listing price and its uptick, they could take an editorial stance of playing the role of the watchdog that has clearly been abdicated by those actually responsible. By flashing the ridiculous listing gains, what the television channels in effect do, is lure the never ending list of gullible and greedy small investors in droves to this stock counter.

When this happens, the scene that follows is reminiscent of one I watched on the National Geographic channel where crocodiles wait patiently in the river for crossing herds of zebras before moving in for the kill. Simply put, the operators sell aggressively once gullible retail investors start pouring in and before the latter know it, they are left holding the stock whose price almost immediately takes a U-Turn and commences a southward journey at break neck speed.

What a wonderful modus operandi!

The guaranteed investor gets a 30 per cent cash discount and hence an inbuilt safety net so that even if he is forced to bail out 20 per cent below the issue price, he still gains, not to speak of having laundered his black money white.

The promoter gets an upfront 100 per cent ramp-up on the IPO price and the operator make a killing by dumping the shares at their peak price, the watchdog looks the other way and the gullible albeit greedy retail investor gets slaughtered.

Those in the know claim there are 3 to 4 (in)famous operators who take up contracts from promoters and their investment bankers to ensure that their IPO gets fully subscribed irrespective of the market conditions.

It is also claimed that these Gujarat and Mumbai-based operators are very ‘professional’ and have infrastructure in place including dummy retail applicants for the IPO and sub-accounts with some foreign institutional investors in place for post-listing prop-up operations.

The commerce for this ‘professional’ service is estimated at a minimum of Rs 150 million per IPO. Clearly, with such IPOs flooding the market in recent times, this is one business that is ‘de-coupled’ from even the Indian market, leave alone the global one.

Before you begin to panic sell based on the news around #Evergrande, revisit your initial thesis for the stock If you don't see any change, stay put If not sure, have a profit protection strategy for such stocks

Once the stocks have consolidated in a range for a few years and break out with high volumes, they usually don't settle for small returns A good pattern to add to your repertoire of stock selection methods pic.twitter.com/56lng75kyc