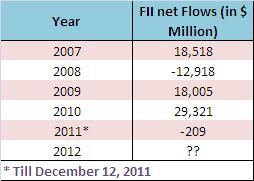 Indian benchmark indices SENSEX and NIFTY are already down by 20%+ for the calendar year 2011, yet there is a lingering concern that what would happen if the FIIs were to pull out money like they did in 2008-09.

This raises the question that can there be substantial fall in the market in calendar year 2012 if FIIs pull out $3-4 bn. Well they definitely can, provided there’s a repeat of Lehmann like situation and it would have a negative impact on the market’s. However before reaching any conclusion let’s understand that why this figure of $209 mn FII outflow could be a bit misleading.

As per the study done by Morgan Stanley, drawing out the numbers from Emerging Portfolio Fund Research [EPFR], comparing it with FII [foreign institutional investors] flows and then say that the two don’t match and worry about the source of flows to India is not the right way to go about determining FII flows into India.

This is because EPFR does not cover all funds that invest or can invest in India. In the past few years, flows into India have diversified and India is receiving money from many more sources. If one is to take into account the traditional investors, India-dedicated funds, hedge funds and emerging market funds, they have already sold equities worth $10-12 billion in Calendar year 2011.

But then one would think that why are we still talking about just $209 mn FII outflows when the traditional investors have already sold equities worth $10-12 bn. Well this is because the US pension funds have made net purchases to the tune of $10-12 bn.

So, the traditional fund managers appear under-exposed to India at this stage and thus instead of outflows, we could rather witness surprisingly good FII inflows in 2012.

The second reason why FIIs may not be so foolish to further sell Indian equities is the fact that they are reeling under the double whammy of market correction of 20-25% and Indian currency depreciation of another 15-20%, which makes Indian equities very cheap at the moment. While this situation may be inflicting pain on all the FIIs already invested in India, but on the other hand this also calls for investments by FIIs and Pension funds who are under-exposed to India. 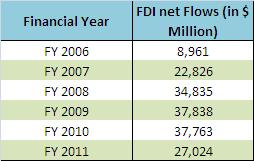 The good thing about Pension funds is that their investments are more long term oriented and stable in nature in comparison to investments by hedge funds. Besides Pension fund flows, India is also witnessing a deluge of Foreign Direct Investments (FDI). During the April-September’11 period, FDI went up by about 74% to $19.13 billion from $11 billion in the year-ago period.

Further, another study by Morgan Stanleyâ€™s global analyst team, which covers 1,766 companies, reckons that 339 of these companies have plans to invest in India. These investment plans add up to a pipeline of about $80 billion over the next 12-24 months.

It is extremely important for India to have stable and long term capital flows, because it is these investments in the present that will shape the robust future of the Indian economy and thus the capital markets.