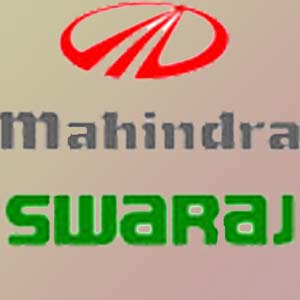 In all the gloom and doom surrounding the Indian economy, there’s been one major positive this year and that is above average rainfall in almost all the parts of India. The cumulative rainfall for the country as a whole till 28th Aug’13 was 11% above the average. The rainfall has been in excess of 15% in all the regions, except east and northeast India where it’s 29% below average.

We believe good monsoon augurs well for companies related directly/indirectly to the agriculture segment. While we already have VST Tillers Tractors under our coverage (for details click HERE – 10th report from the top), another company in the same segment that looks good is Swaraj Engines (NSE Code – SWARAJENG)

As the name suggests, Swaraj Engines (SEL) manufactures 20-50 horsepower (HP) engines for “Swaraj” tractors division of Mahindra and Mahindra Ltd (M&M). Besides, it also supplies hi-tech engine components to SML Isuzu Ltd for assembly of commercial vehicle engines; however this division’s contribution to the turnover is very low at about 4-5%. Since the start of commercial operations in 1989-90, SEL has supplied around 517,000 engines for fitment into “Swaraj” tractors.

Swaraj brand of tractors were originally promoted by Punjab Tractors Ltd (PTL). PTL also had 33.16% stake in Swaraj Engines along with Kirloskar Oil Engines 17.39% stake. In June 2007 PTL was acquired by Mahindra and Mahindra and thereby Mahindra ended up owning “Swaraj” brand of tractors and 33.22% stake in Swaraj Engines while Kirloskar continues to be the co-promoter with 17.39% stake.

Since the takeover of PTL by M&M, there’s been complete turnaround in the fate of “Swaraj” brand of tractors and the same has also rubbed off on Swaraj Engines (for more details on turnaround story of Swaraj Tractors, click HERE). While Swaraj tractors had slipped to 5th place with 9% market share before the acquisition by M&M in 2007, it now commands a market share of 13.1% and rank 3rd behind M&M tractors and TAFE.

Growth drivers for the tractors Industry

Coming back to Swaraj Engines, while good/bad monsoon is a key determinant of tractors sales in any particular year, we believe the long term prospects of the industry are bright on account of the following factors:

As can be observed from the below illustration, the company has reported good all-round performance in the last 6 years i.e. since the time Mahindra and Mahindra acquired Punjab Tractors Ltd and thereby majority stake in Swaraj Engines. 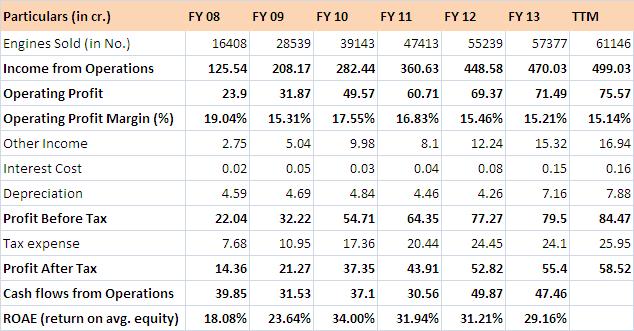 Besides good growth, the company has also done well on other metrics such as cash flow generation, return on equity, margins etc. Excluding the impact of other income, the cash flows from operations have been higher than the reported profits as there’s virtually immediate payment terms with M&M Swaraj division.

Despite the above expansion, Swaraj Engines still had ~110 crores surplus cash with it (after accounting for total dividend of Rs 33/- per share for FY 13 and other payables) at the end of Mar’13 which is ~20% of its current market cap of 550 crores.

At current price of 450-470, the stock is available at 10 times trailing twelve months earnings. To us, the valuations look reasonable considering the quality of operations, majority shareholding of M&M and considering the long term prospects of the industry.

However, it’s important to keep in mind that bad monsoon can play a spoilsport in any particular year and that should be used as an opportunity to increase allocation at lower prices.