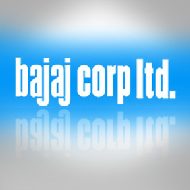 Let’s look at how the company performed and what all has changed after the acquisition.

The detailed report on the company shared with Alpha and Alpha + members in Jul’12 at Rs 130/- can be accessed at the following link:

Disclaimer: We ourselves and our members are invested in the stock discussed below. Also, please do not construe the below note as buy/sell advice and do carry out your own due diligence before buying/selling the stock. 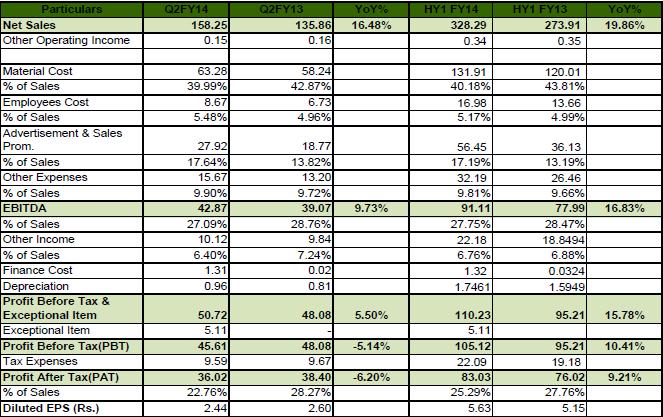 The snapshot of the results is attached above. As can be observed, the company has reported 16.5% growth in sales, 9.73% growth in operating profit, 5.5% growth in profit before tax and exceptional items and 6.20% drop in profit after tax over Sep’12 quarter.

Regarding growth – Considering the past performance of Bajaj Corp, the above results are subdued; however the performance should be seen in the light of general slowdown in the consumer spending during the last few months.

For instance, as per the data published by Nielsen, during the 5 months period of Apr-Sep’13 overall branded hair oil market grew by 5%, light hair oil segment grew by 15.4%, while Bajaj Corp’s flagship brand Bajaj Almond drops grew by 21.73%. Thus, despite the slowdown the company has been gaining market share.

The slowdown is more pronounced in urban regions, while the growth in rural regions continues to be in excess of 20%. As a result, rural regions now contribute 38% to the sales of the company.

As per the management, they expect to sustain 15-17% growth and find it difficult to envisage 20-25% growth at least for the next 2 quarters.

Regarding lower growth in Operating profit – While the sales of the company have grown by 16.5%, operating profit is up by just 9.73%. As clearly evident from the above illustration, company spent heavily on Advertizing and sales promotion (ASP).

However, we believe the management has a very clear stance and that is during the periods of slowdown it is much more important to push the brand and make it stronger with higher spend on advertisement and sales promotion. From their experience of last two instances of slowdown, with a turn in cycle, the resultant increase in market share will be much faster.

It’s good that management is thinking of long term prospects rather than focusing too much on analyst’s expectations and engineering the numbers to their liking.

The impact of above loan on the P&L will be very low; however considering the surplus cash and the annual cash flow, we believe they could have avoided the loan. Anyways, towards the end of the con-call, the management indicated that they may consider repaying the loan this year itself and based on the agreement with the bank, there won’t be any foreclosure penalty.

NOMARKS contribution to sales – As per the management, there was no contribution from NOMARSKS during the Sep’13 quarter and the meaningful contribution shall start only from Nov’13.

Further, the management also indicated that before the acquisition, the NOMARKS brand was recording annual sales of ~40 crores with gross margins of 61% which are on the same lines as Bajaj Almond drops hair oil.

It’s important to note here that 140 crores have already been paid for the acquisition and the above is just an accounting adjustment with no further cash outflow. While the company will be writing off the brand value to 0 crores, its intrinsic value might actually go up substantially.

From our perspective, not much has changed, except for the fact that consumer spending has slowed down for the time being and even then Bajaj Corp has been able to grow at 15% +

Moreover, from the perspective of long term investors in the company, the management is actually doing well in terms of their focus on strengthening the brand during the period of slowdown and not using aggressive accounting practices.

Members can consider increasing allocation around current levels and on further correction in stock price.