In Nov’13, Ricoh India (BSE Code – 517496) came up with an unprecedented second de-listing offer and we believe there’s high probability of at least 15-20% upside over the next 1 month from the current levels of 145. The company has received all the approvals and has announced the following time-table for the de-listing offer. As can be observed from the below illustration, the entire process is likely to get over by 23rd Jun’14. 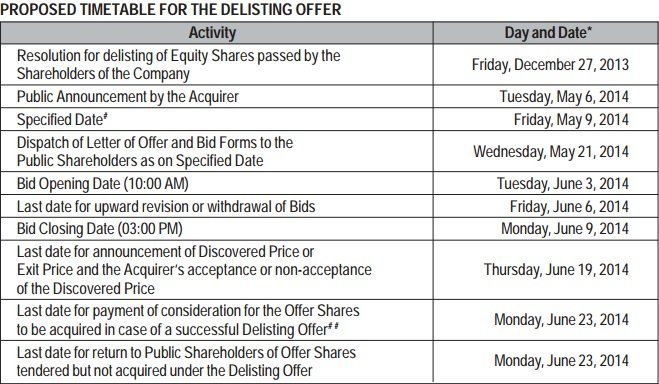 Ricoh India de-listing opportunity was shared with Alpha + members on 18th Nov’13 when the stock was quoting around 107-108 and they are still holding the same. The promoters have already announced 120 as the indicative offer price. In the past many de-listing cases, especially with foreign promoters, shareholders have tendered shares at 40-50% premium (in some cases even 100% premiums) to indicative offer prices and in most of the cases promoters have accepted such prices.

To us, Ricoh India looks like a case where the probability of above panning out is high.

Disclaimer: Please don’t construe the above note as investment advice and carry out your own due diligence before buying/selling the stock.

For those interested in participating in Ricoh India de-listing opportunity, we have produced below the detailed note shared with Alpha + members on 18th Nov’13.

We would like to bring to your notice a Special situation opportunity on the proposed de-listing of Ricoh India Ltd (BSE Code: 517496)

Note: Please read the entire note to make an independent assessment of the risk reward ratio in this opportunity

Ricoh India Limited (RIL) is one of India’s leading sellers of office automation equipment like copiers, printers and multifunctional devices. It is the subsidiary of Ricoh, Japan, one of the world’s leading players in the office automation industry. The parent company owns 73.6% of the equity of Rs 39.7 crore.

On 11th Nov’13, Ricoh in its letter to Stock Exchanges informed that the Board of Directors of the company has approved the proposal made by the Promoter entities (Ricoh Company and NRG Group) to make a voluntary delisting offer to all the public shareholders of the Company.

Some important points about the above De-listing proposal

There are some important points about this de-listing offer which makes us recommend it even at current levels of 107-108. The key points are as below:

It’s a voluntary de-listing offer because promoter holding is less than 75% (73.60%)

This is a second attempt for de-listing. The promoters first attempted de-listing last year in Nov’12; however the same failed as the requisite number of shares was not tendered (39.06 lakh shares were tendered against the minimum required 65.21 lakhs) at or below the discovered price.

The discovered price in Nov’12 de-listing attempt was Rs 130/- per share. Thus, had enough shares been tendered, promoters may have accepted the price of 130 in first attempt itself.

Outside Japan, Ricoh India is the only other listed entity of Ricoh group.

We believe, the above points are indicative of the very strong intent of de-listing, especially the fact that promoters are coming up with second offer just one year after the failed attempt.

What is even more important is that Promoters are already aware of the last attempt’s discovered price of Rs 130 and are probably willing to pay 130 or slightly higher for the acquisition of shares.

So, for those buying in the current price range of 105-110 the downside risk is very low till the company receives the shareholders approval (should not be a major hurdle) and further proceeds with the delisting process through reverse book building.

The above are some of the positives with the proposed de-listing offer, however there’s one negative that there is no support in terms of operating performance or the valuations of the company. This factor will come into play only if the promoters abandon the de-listing offer, the probability of which is very low.

Considering the fact that in the short term the downside risk is very low (except in case the de-listing proposal is abandoned), while there could be a decent 15-25% gain in the run up to reverse book building, we would like to suggest the following investment and exit strategy:

As mentioned above, as we are still some steps away from reverse book building, if the promoters backtrack on the de-listing proposal there would be a rush to exit from the stock and one may not be able to exit before the stock has corrected by 20-30% from the current levels of 107.55.

Secondly, in case the stock does not appreciate to 130-135 levels, we will consider holding the stock till the results of postal ballot are declared and in case the company does not receive adequate votes in favor of the de-listing proposal (very low probability as last time there was clear majority in favor of de-listing); the above mentioned scenario of 20-30% correction will pan out.

We would like to add here that the probabilities of both the above cases are extremely low; however one should still be aware of the risks involved as the resultant impact will be 20-30% loss.

In case of any queries, feel free to drop a mail or call us.