We have released 25th May’19: Anjani Portland Cement Ltd (NSE Code – APCL) – Alpha/Alpha Plus stock for May’19. For details and other updates, please log into the website at the following link – https://katalystwealth.com/index.php/my-account/

Note: For any queries, mail us at [email protected]

Rating – Positive – 4% weightage; this is not an investment advice (refer rating interpretation)

Anjani Portland Cement (APCL) is engaged in the business of manufacturing cement.

It is part of the Chettinad group which is one of the prominent business houses in South India with diverse businesses including cement manufacturing, transportation, logistics and supply chain management and construction.

As on date, we like several points about the company and they are as below:

Expected upturn in cement cycle – We see cement as a cyclical business and therefore in the case of cyclical businesses it becomes important to buy them when the valuations are actually low and not optically low.

As far as cement sector is concerned, the last two years were not been so good for the industry with higher input costs and companies finding it difficult to pass on the prices on account of lower capacity utilization.

However, it seems that cycle is turning around as the utilization rates are improving and the cement prices have also started rising.

With stable govt. in place and expected push to infra and housing sector, the improvement in demand for cement sector is likely to sustain.

Debt free – While APCL has not been very aggressive in expanding capacity, it has focused on improving capacity utilization at the existing plant.

On the back of decent operating cash flows, the company is now debt free on net basis.

Cyclically low valuations – It is believed that replacement cost for 1 MTPA integrated greenfield cement unit is ~700-850 crore and if the company has limestone reserves, it becomes a huge advantage.

Thus, the stock is currently available around 0.42 times replacement cost.

APCL is part of the Chennai based Chettinad group which was formed in 1935. Chettinad group has a diversified business with interests in cement, construction, logistics, engineering, education, transportation, healthcare and other businesses.

One of the flagship companies of Chettinad group is Chettinad Cement Corporation Private Limited, being the holding company of APCL.

APCL was incorporated in 1983 as Shez Chemical Limited and was promoted by Syed Badruddin Shez and Naseerudin along with two NRI’s.

In the year 2014, Chettinad Cement Corporation Private Limited (CCCL) acquired 75% stake in APCL at an enterprise value of ~350 crore.

Cement unit – APCL has an integrated cement unit at Suryapet district of Telangana with installed capacity of 1.16 MTPA.

APCL sells its cement under the brand name of “Anjani” and has a dealer network presence across all the 5 southern states and Maharashtra. However, Andhra Pradesh and Telangana contribute more than 70% to the sales of the company.

In the past the management has indicated interest in expanding sales in eastern states like West Bengal and Odisha. Also, depending on the sales traction in the 2 states, to minimize the cost of transportation, the company may consider setting up a cement grinding plant in the eastern part of India.

APCL sources limestone from its captive mines (probable reserves of more than 50 million tonnes) located at a distance of 7.5 km from the cement plant. The abundance, quality and access to limestone, is a key strength of the company.

Power and fuel – The company also has captive thermal power plant with an aggregate capacity of 16 MW.

It commissioned the same in Jan’17 and as per CARE Ratings report, the same accounts for more than 90% of the company’s power consumption.

Coal is the main fuel for manufacturing operations and is required for firing the pre-heater and rotary kiln as well as to generate power for grinding the clinker. In addition, coal is also the main source of fuel for the captive power plant.

The company buys coal from indigenous sources and also uses coal that is bought from Indian companies who in turn import from international markets, specifically South Africa, Australia and Indonesia.

In order to reduce dependence on coal, APCL has been proactively using alternate sources of fuel since the year 2010. Hyderabad and the nearby areas are replete with pharmaceuticals manufacturing companies which generate vast quantities of hazardous waste such as spent carbon, organic liquid and organic solid. This waste is costly to recycle and is difficult to eliminate. The waste generated by these companies is suitable for use in APCL’s manufacturing process as fuel. The pharmaceutical waste is easily available at significantly lower cost.

The alternate fuel has substituted coal to an extent of ~20% of company’s total fuel requirement. Nevertheless, coal still remains its primary source of fuel. 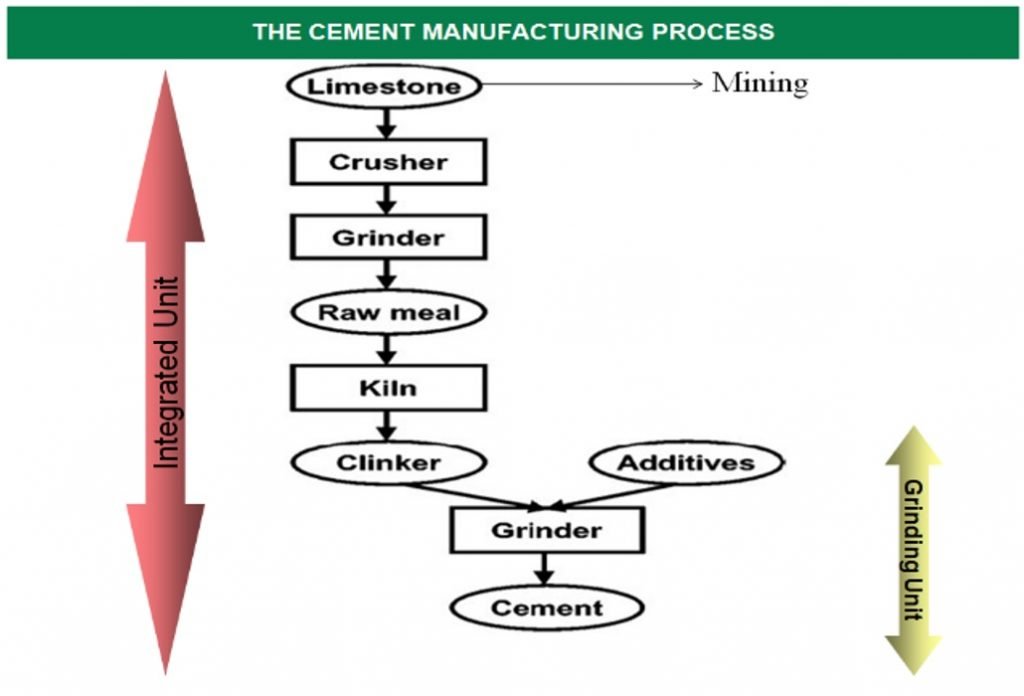 India is the second largest consumer and producer of cement in the world. 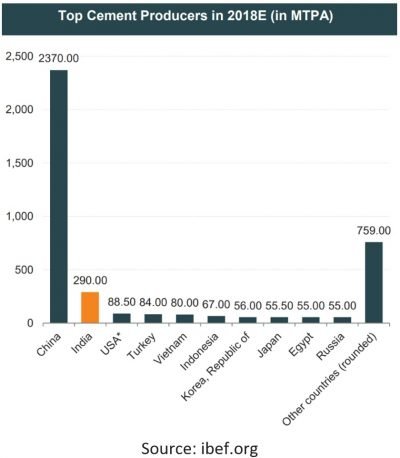 India has a lot of potential for development in the infrastructure and construction sector and the cement sector is expected to largely benefit from it.

Expecting such developments in the country and aided by suitable government foreign policies, several foreign players such as Lafarge-Holcim, Heidelberg Cement, and Vicat have invested in the country in the recent past. A significant factor which aids the growth of this sector is the ready availability of the raw materials for making cement, such as limestone and coal. 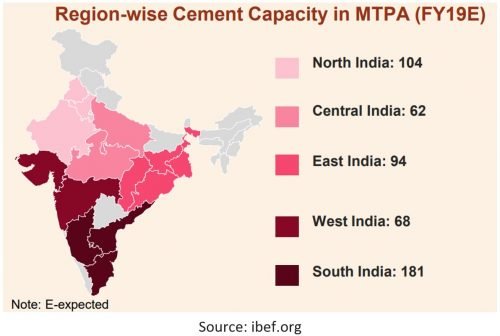 Over the last 6 years the cement consumption in India has recorded 4.3% CAGR. As per one of the reports, due to the increasing demand in various sectors such as housing, commercial construction and industrial construction, cement industry is expected to reach 550-600 MTPA by the year 2025 and record 9.2% CAGR in consumption over 2018-2025. 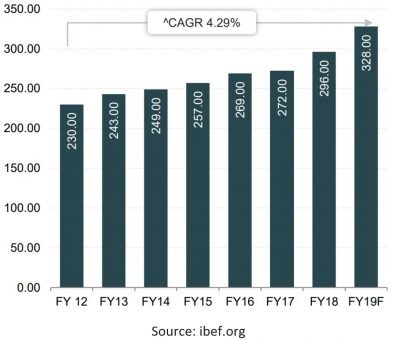 As per one of the estimates, the per capita cement consumption at 210 kg is currently the lowest among developing countries while the world average is 580 kg. The demand potential for cement in India can be further gauged from the fact that while India produced ~290 MT of cement in FY 18, China produced ~2,370 MT.

Growth drivers – The demand for cement in India can be attributed to three main sectors viz. Housing and Real Estate, Public Infrastructure and Industrial Development. 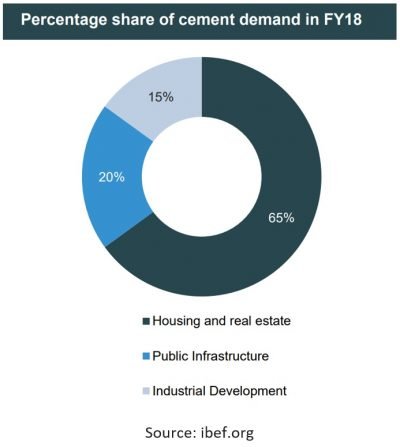 The factors that will lead to increase in demand from these sectors include:

In the year 2014, Chettinad Cement Corporation Private Limited (CCCL) acquired 75% stake in APCL at an enterprise value of ~350 crore.

Chettinad group is one of the prominent business houses in South India with diverse businesses including cement manufacturing, transportation, logistics and supply chain management and construction.

Chettinad Cement Corporation Private Limited (CCCL) the promoter of APCL was incorporated in the year 1962 and has been in operation for more than five decades with presence across all five southern states and Maharashtra. CCCL has installed capacity of 12 MTPA.

We consider Promoter holding important from the perspective of skin in the game and it is good to note that at the end of Mar’19 the promoters had 75% stake in the company. 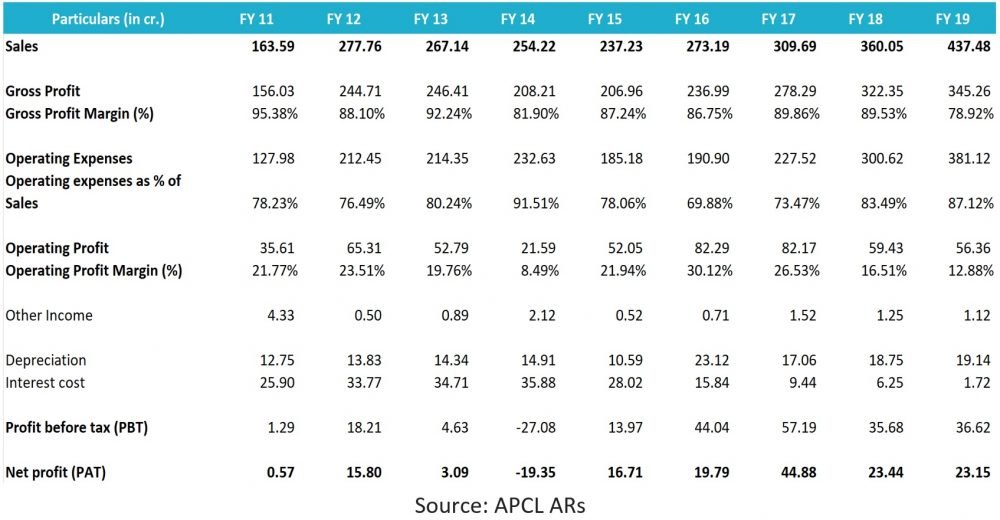 The performance of cement company is dependent on following major factors:

As far as APCL is concerned, it has access to good quality limestone through its own mines and the same are at a distance of around 7.5 km from the cement plants.

It is believed that the demand growth is likely to sustain and therefore APCL should be able to maintain the current high levels of capacity utilization.

In fact, since Jul’18, APCL has also started trading in cement wherein it procures cement from CCCL and sells it under “Anjani” brand in Tamil Nadu, South Karnataka and Kerala through its own network of dealers and distributors.

The major pain points for the company since the last 2 years have been the freight cost and the power and fuel cost and limited ability of the company to raise prices.

In general, it’s been observed that margins tend to be very cyclical in the cement industry and if the demand sustains, the company should be able to pass on the rising costs through increase in prices.

In our view, for a cyclical industry, it is more important as an investor to ensure that one is not buying the stock at potentially peak business earnings.

As far as other important numbers are concerned, the company has done well in terms of cash flows, return ratios and overall balance sheet structure.

At the end of Mar’19, the company is debt free and holds surplus cash to the tune of around 25 crore.

Going forward, if the company decides to set up a grinding unit in eastern parts of India, it won’t have to take much debt as it is consistently generating close to 50 crore cash from operations annually.

From the above sections we know the following:

From the above illustrations we know that it costs around 800-850 crore to set up a greenfield 1 MTPA integrated cement unit. 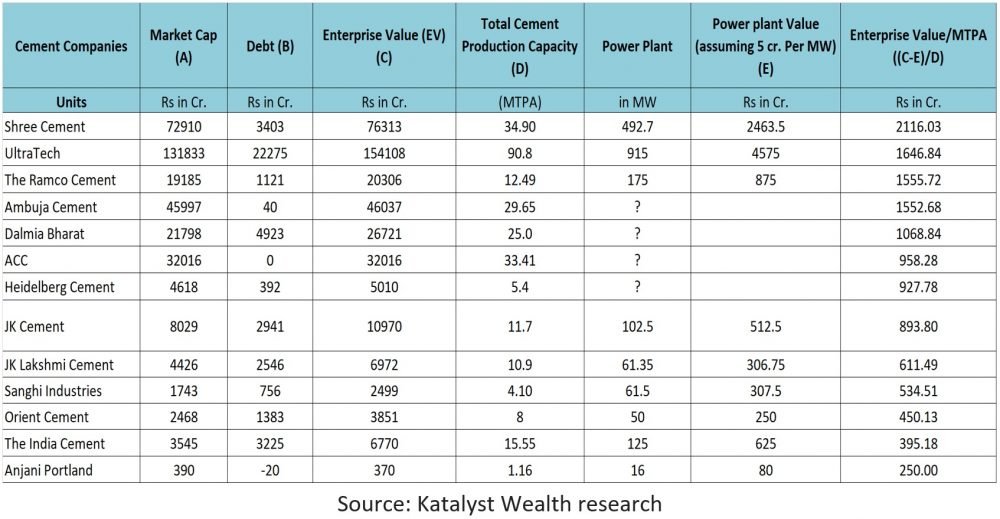 If the company embarks on a large debt funded capex, the valuation metrics will change.

In case of sustained rise in input costs and lower demand, the profitability and the valuations of the company will be impacted.

Unlike other cement companies, APCL is already running its plant at around 90% capacity utilization and therefore the scope for growth in sales is limited.

Disclosure: I do not have any holding in Anjani Portland Cement Ltd and have not traded in the stock in the last 30 days.

Analyst ownership of the stock: No

Details of Associates: Not Applicable

Analyst Certification: The Analyst certify (ies) that the views expressed herein accurately reflect his (their) personal view(s) about the subject security (ies) and issuer(s) and that no part of his (their) compensation was, is or will be directly or indirectly related to the specific recommendation(s) or views contained in this research report.

The views expressed are based solely on information available publicly and believed to be true. Investors are advised to independently evaluate the market conditions/risks involved before making any investment decision.

A graph of daily closing prices of securities is available at www.bseindia.com (Choose a company from the list on the browser and select the “three years” period in the price chart.

This report is for the personal information of the authorized recipient and does not construe to be any investment, legal or taxation advice to you. Ekansh Mittal/Mittal Consulting/Katalyst Wealth is not soliciting any action based upon it. This report is not for public distribution and has been furnished to you solely for your information and should not be reproduced or redistributed to any other person in any form. This document is provided for assistance only and is not intended to be and must not alone be taken as the basis for an investment decision. Ekansh Mittal or any of its affiliates or employees shall not be in any way responsible for any loss or damage that may arise to any person from any inadvertent error in the information contained in this report. Neither Ekansh Mittal, nor its employees, agents nor representatives shall be liable for any damages whether direct or indirect, incidental, special or consequential including lost revenue or lost profits that may arise from or in connection with the use of the information. Ekansh Mittal/Mittal Consulting or any of its affiliates or employees do not provide, at any time, any express or implied warranty of any kind, regarding any matter pertaining to this report, including without limitation the implied warranties of merchantability, fitness for a particular purpose, and non-infringement.

The recipients of this report should rely on their own investigations. Ekansh Mittal/Mittal Consulting and/or its affiliates and/or employees may have interests/ positions, financial or otherwise in the securities mentioned in this report. Mittal Consulting has incorporated adequate disclosures in this document. This should, however, not be treated as endorsement of the views expressed in the report.

We submit that no material disciplinary action has been taken on Ekansh Mittal by any regulatory authority impacting Equity Research Analysis.

Whether the research analyst has served as an officer, director or employee of the subject company – No