Identifying trends in various industries is a great way to identify investment opportunities in related stocks. We were recently looking into the real estate industry and identified an unexpected trend over the last 5 years. Let’s see what it is...

In the last 5 years, the government has taken many steps that were believed to have a negative impact on the real estate industry, specifically the smaller developers. Here we are talking about Demonetisation, GST & RERA.

However, data shows that since 2016 small developers have grown at a faster pace compared to larger developers. In fact, even though larger developers have delivered growth in absolute numbers, they have actually lost market share to smaller developers. This finding kind of busts the myth that the retail industry is consolidating and instead builds a strong case that the real estate industry is broadening (at least in Tier 2 and 3 cities) and might continue to do so in the coming decade.

In a research note, Mr. Pankaj Kapoor, founder and managing director of Liases Foras said that ‘Rather than consolidating, the landscape of housing is expanding and will continue growing. Small developers of Tier 2 and Tier 3 cities will play a significant role in broadening housing and housing finance in India.’

As we can see in the table, the number of developers has grown consistently except for in 2020 when Covid 19 pandemic disturbed most businesses and industries. 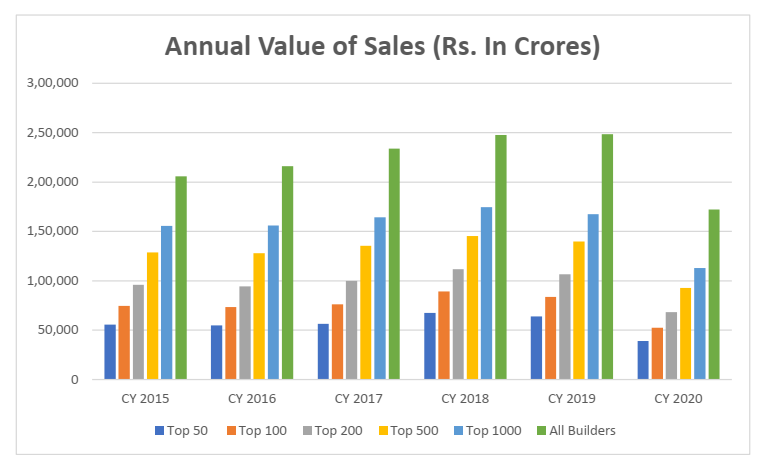 The above chart shows a decent growth in the industry itself however, even the top 1000 developers have not been able to catch up with the growth and have lost market share to smaller developers.

Another trend that has been noticed is larger developers outsourcing the complete project to smaller developers. This helps them avoid keeping that project on their books. Also project delays used to bring up the estimated costs of the project significantly. By outsourcing the project, the delay time and incremental costs were seen to be reduced by almost 25%.

It would be interesting to watch how the industry develops in the future and the role that smaller developers play in the development of Tier 2 & Tier 3 cities in the country.

We are working on few more interesting stock investment opportunities and will share something good in the next few days. You can get it along with our other Premium Members by signing up HERE